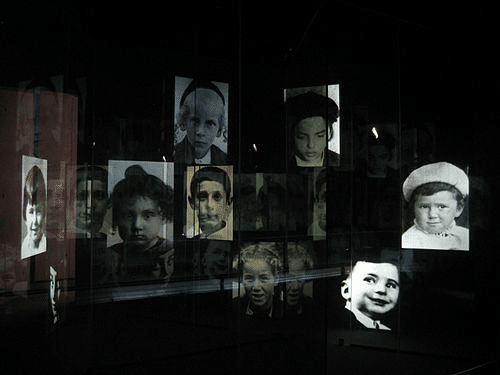 Did you ever wonder why they called him Moshe? In these very days when we are reading about Moshe getting his name in the Torah, we are also noting the 75th anniversary of the liberation of Auschwitz, Here is a pertinent thought from Rav Dov Wein:.

“Years ago, on a visit to Jerusalem, I saw an announcement in the newspaper: ‘Today in the Yad VaShem Holocaust Museum a new children’s wing (Yad LaYeled), in the memory of the one and a half million Jewish children who were murdered in the Holocaust, will open.’ I decided to visit the new exhibit and when I got there I entered a very dark room. Once my eyes got used to the dark, I noticed stars glittering in the darkness. In the background, voices calling out the names of children who perished could be heard. Names, names, names. Yehuda and Yehudit, Ya’akov and Sara, Meir and Rachel. I could not stand it for long and soon left the dark room for the clear and beautiful air of the Jerusalem hills.
I thought to myself that, during the Holocaust, I was the same age as the children whose names were called , but in the recording played in that dark room my name was not called. Of course the Nazi tyrant was aiming for me, too. Only because my parents immigrated from Europe to America before the Holocaust was I fortunate to escape. Therefore, I can also be considered a survivor of the destruction. And if I survived, there surely is a reason for that and an important mission that I must take upon myself. I must contribute to the revival of the nation of Israel, to rebuild the world of Torah and Judaism that was destroyed. The truth of the matter is that this is the order of the day for every man and woman in our generation who belongs to the nation of Israel. No, our names are not heard in the recording played in that dark room and yet, perhaps, we are like Moshe himself and all of us share the same name.
As the verse states: ‘She named him Moshe (meaning to take or draw out), and she said: For I drew him from the water’. Moshe is drawn out of the water and saved from drowning because his future task it to take out – to take others out. And this is our mission too. In a sense, all of us today, are called Moshe. In every generation, we were saved from decrees and persecution, and if we have gotten this far, we all have the same obligation. ‘For I drew him from the water,’ we need to tell ourselves and then conduct our lives accordingly – drawing one another out into the light”.

How should we judge others?

We Were Not Mighty Heroes

Short is Not Necessarily Superficial