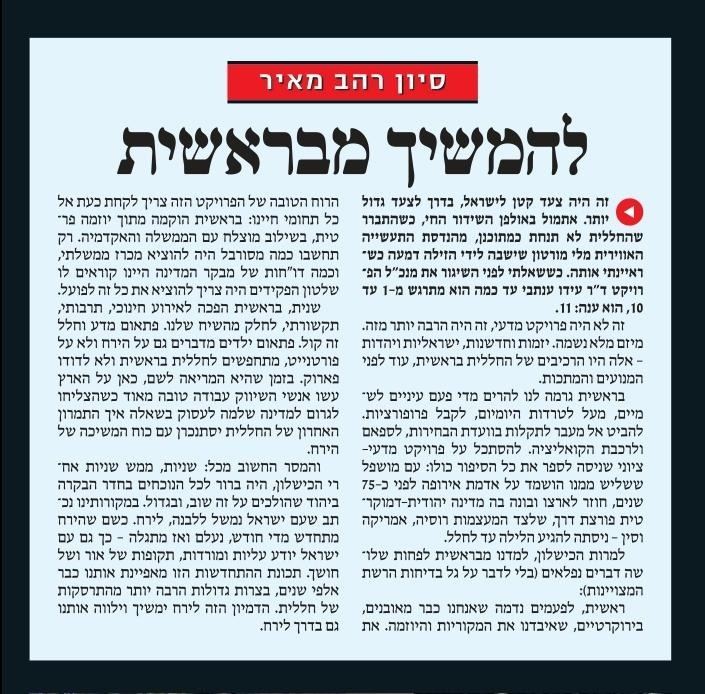 It was a small step for Israel, on the way to a bigger step. This Thursday at the live broadcast studio, when it became clear that the spacecraft would not land as planned, IAI engineer Lee Morton, who was sitting next to me, shed a tear when I interviewed her. When, before Beresheet’s launch, I asked project director Dr. Ido Antebi how excited he was from 1 to 10, he replied: “11.”

Beresheet was not just a scientific project, it was much more than that. It was a soulful initiative. Entrepreneurship and innovation, Israeli and Jewish – these were the components of the Spacecraft Bereishit, even before the addition of state-of-the-art instruments and engines.

And this was the most important message of all: seconds, just seconds after the failure, it was clear to everyone in the control room in Yehud that we are going to be doing it again, big time. In Jewish tradition, we learn that the Jewish people are like the moon. Just as the moon renews itself every month, disappearing and then becoming revealed yet again – so too does the Jewish people know ups and downs, periods of light and darkness. This feature of renewal has been characteristic of our nation for thousands of years, at times of far greater trouble than a spacecraft crash. This resemblance to the moon will continue and will accompany us, also, all the way to the moon.