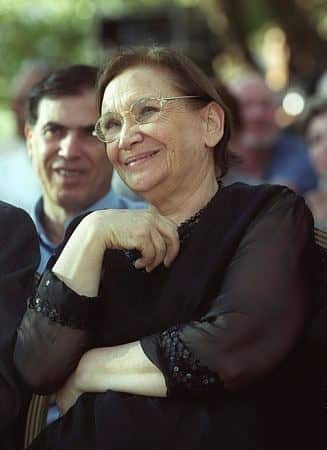 What follows is one of the final statements of Naomi Shemer – the songstress who provided the soundtrack for an entire generation in Israel. Today is the 16th anniversary of her death and this is what her son Ariel Horowitz once said:

“On one of mother’s last nights in this world, she said that it’s clear to her she is about to depart from us and then she suddenly said: ‘I gave a day’s work.’
In these words she actually meant to say: ‘I did my part. I worked hard and I achieved something. Now I can go.’
It’s a privilege to feel this kind of completeness and this also reminds me that there is no difference between recording a new song of mine in the studio and teaching music to students anywhere. Because I still need to give whatever I have all the time as long as I’m in this world. It doesn’t matter if it’s exciting and makes the adrenalin flow or routine and gray. As long as you are bringing maximum benefit you are in your proper place and you must be there completely in that moment. To give your very best. To give a day’s work.”

Thank you, grandpa and grandma

How to build immunity

The Headline is in Your Hand

Between Sderot and Arizona