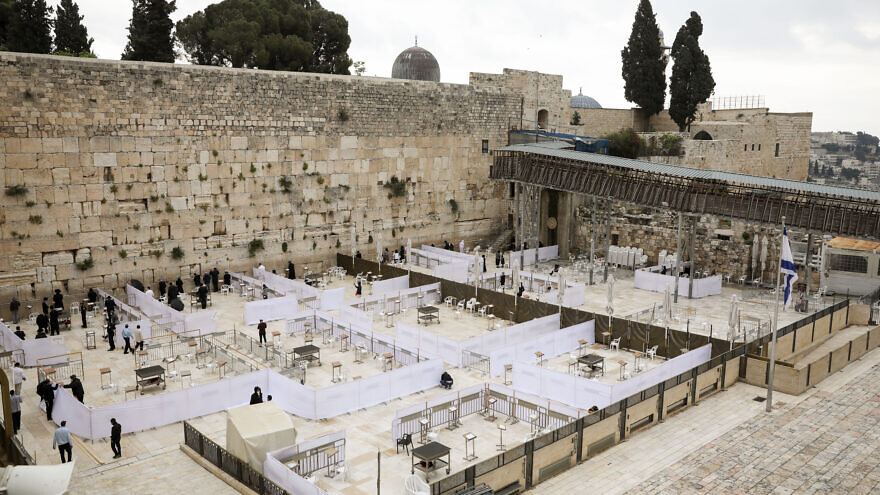 The nation of Israel returns to the Kotel. People are talking about the different branches of the economy that are reopening, and now the Kotel is reopening too. We were there yesterday and we saw the place returning to life. One of the workers told me that you no longer just hear the birds like you did recently. I met people from Zikhron Ya’akov, from Kibbutz Beit Kama, from Ramat Gan. More and more Israelis who missed the Kotel. “We returned to the cisterns, to the market, and to the city square” – words from Yerushalayim Shel Zahav – I heard someone singing softly at the security checkpoint.
Last night I saw maximum strictness regarding the saftey rules: the attendants make sure that a mask covers your mouth and nose before directing you to a “capsule” – an area surrounded by white fabric dividers. Each capsule is limited to 30 people. (There is a special feeling praying under such circumstances, in a small group opposite the ancient stones. Praying at the Kotel – typically done among a vast crowd – suddenly becomes something more intimate.) Many people are waiting in line while disinfecting their hands at the sanitizer station, waiting for someone to leave one of the capsules to make a place available to them. In total, only 1,000 people can gather in the Western Wall Plaza praying area at a time. There were many Bat Mitzvah girls and Bar Mitzvah boys whose celebrations were canceled and had come to make up for them in some fashion. Traditional parties of first graders receiving their first prayer book, albeit on a small scale, were held. Many people were taking pictures as a memento “to tell the grandchildren how we stood in line to enter a capsule at the Kotel,” and some sent pictures immediately to friends abroad who could not be there.

The new month of Tammuz, the Western Wall, social distance but lots of closeness. Have a good month.

The Job: To Change

Seeing the Pain, Looking It in the Eyes

Fear of faliure? Fear of success!