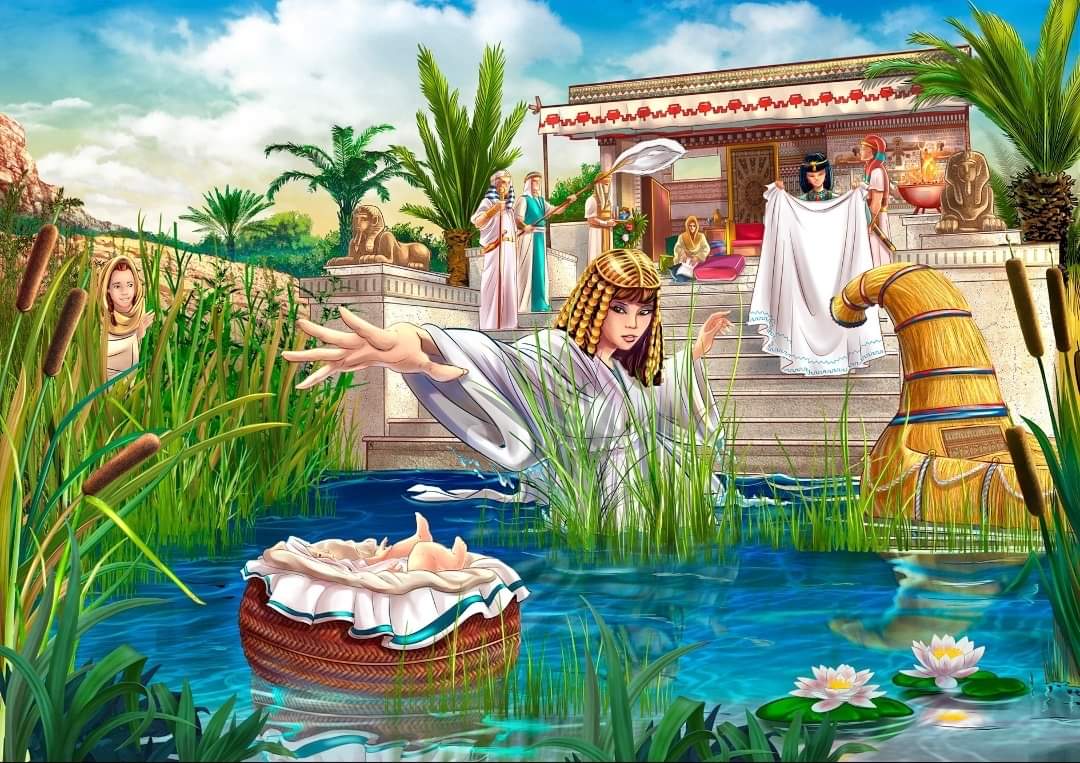 ציור: יואל וקסברגר, מלכות וקסברגר
Translation by Yehoshua Siskin
In a certain sense, the real “women’s lobby” originated in this week’s Torah portion: Two Hebrew midwives refuse to comply with a command from the most powerful man on earth. Pharaoh orders them to kill all Jewish baby boys but the midwives allow them to live. They have no fear of a wicked, temporary Egyptian king, but fear only the one true King.
Yocheved also demonstrates extraordinary courage when she becomes pregnant and gives birth to a boy despite Pharaoh’s decree – that every Hebrew baby boy is to be drowned in the Nile –and then hides him in a reed basket, waterproofed with tar and clay.
Miriam, the baby boy’s sister, demonstrates courage of another kind: after placing the basket on the edge of the Nile River, she stands at a distance and watches it until it is discovered by Pharaoh’s daughter, Batya. She convinces Batya to allow the baby’s mother to raise him in Pharaoh’s palace.
And Batya, too, shows courage in not behaving like Pharaoh, her father, but acts compassionately, in opposition to Egyptian norms. Batya stretches out her hand to rescue the baby, takes him out of the water and even gives him his name, Moshe.

What’s the message, what’s the common denominator of these behaviors? All of these women could have easily chosen to be passive and small-minded. Everything around them was full of darkness and despair and the situation gave them plenty of excellent excuses not to do anything. But they did not lose their faith and hope and became the inspiration for generations of Jewish women. They all decided to at least try, against the dictates of logic and common sense, to make a small contribution towards bringing more goodness into the world. Thousands of years later, we understand how much each one of these small feminine acts was a giant step towards bringing the concepts of freedom and redemption into the world.

To listen and lighten their load

From the Mountain to Life

Not Ashamed to be Slow

A little advice for teachers